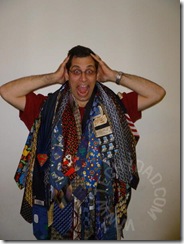 This Sunday is Father’s Day.  All over the country, dads will open gifts from their family.  Many of those gifts will be the stereotypical gifts given to dads on Father’s Day.  Tools for grilling, electronics, sporting goods, items emblazoned with a favorite team’s logo and, of course, ties.  However, while ties might be a stereotypical gift, I’ve got to admit that I like them.

I didn’t always like ties, though.  When I was young, I hated having to wear a tie.  I always felt like it was choking me.  I’d put up with it for the bare minimum amount of time that was required and then it would be torn off.  Ties were symbols of stuffy affairs lacking in any fun.  My father, on the other hand, loved ties.  He had quite a few of them too.  We joked that he could wear a different tie each day for an entire year without repeating.  We never really got an accurate count of them, though, as we would lose count somewhere around 400.

For the record, I don’t have 400 or so ties.  The photo on the right (originally from my post titled This Father’s Day, No More Ties!) shows pretty much all of my ties.  Yes, it is a lot, but all of those ties only total about seventy.

My tie collection began small enough.  When I began my current job, I went from completely casual to a job where I needed to wear dress clothes and a tie.  This meant that the one or two ties I owned would not be enough.  I bought a few dressy ties and figured that would be it for awhile.

Little by little, though, I added to my collection.  We went to Disney World and I got a Mickey Mouse tie and a Winnie the Pooh tie.  We went to Boston and I found a vendor selling some humorous ties.  We went to New York City for BlogHer and I got a tie from M&M World.  I found a World Wildlife Fund line of ties that cleverly hid animals in what appeared to be serious ties.  I invested in the Cocktail collection which featured patterns based on alcoholic beverages as seen through a microscope. I indulged in the Jerry Garcia line of ties that were just plain wacky (in a good way).

I’ve also gotten ties from my wife and from my boys.  Whenever something big is happening with my boys, I put on my Sesame Street tie.  Even though NHL has outgrown the exploits of Grover and Cookie Monster, this tie still reminds me of my boys.

Still, I think I’m pretty set tie-wise.  So I really don’t need another one come Sunday.  Those electronics or grilling utensils on the other hand…