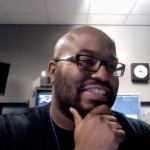 First, I’d like to say that it is an honor to have been asked to join a group of men who are also passionate about being great fathers and sharing their journey. I think that this “Dad Revolution” is a long time coming and feel blessed to live in an age where technology can connect dads from all over the world. When I started my family at the age of 20, I was often alone because I wanted to do “dad things” with other 20-30 year old dads but there were few who wanted to “be down.” Many were too busy trying to hold on to the last bastion of their perceived single guy freedoms, just simply weren’t around, or couldn’t be bothered. Heck, when my wife had her baby shower, I wanted to have a co-ed even it wasn’t popular at all at that time. I figure that if we’re celebrating the birth of OUR child then WE should ALL be celebrating. But, no joy. Since I know I’m not the only one who experienced that, it’s awesome that we are now connected and able to cheer each other on, kick each other in the arse when the need arises and just be each others champions in this fatherhood journey.

Let me dig a little deeper though and say that I think the Dad Revolution is so much more than that. I think it’s a “Man Revolution.” Striving to be the best “you” you can be is what makes a man a great dad, despite failures. If you’re a poor husband it will effect your fatherhood. I know because I’ve been that. If you’re a terrible son or brother, that has a chance to effect your fatherhood. We so easily compartmentalize our emotions (which isn’t a bad thing in the proper moments), but our lives can’t be compartmentalized so effectively. Who we are as men leaks into all the other aspects of our lives and so, being a great dad requires that the revolution first takes place within. And when that happens, I believe that the Dad Revolution can’t be stopped. A Dad Revolution which begins with the heart of a man is a dad revolution which can elevate other men who are sitting on the sidelines to get fired up and join in and begin their own journey to an inner revolution which will have a revolutionary effect in their own homes.

I guess that’s as good an introduction to me as any. I’m a passionate dadvocate, a cock-eyed optimist, a man devoted to his family and being better than his shortcomings and one who is happy to be a part of this revolution and inspire, be inspired and walk arm in arm with other men who heed the clarion call to strong, emotionally healthy households where we no longer leave all the nurturing and raising of the kids in the domain of moms but we take an active, present role in building up, encouraging, mentoring and loving our children. Daddy is more than just dollar signs and a disciplinarian and that is the revolution!