I grew up a big city kid. I loved it because you had access to everyone and everything. Multi-lingual and multi-cultural. There was always something different to try and to choose from each and everyday. Even Rome where I spent most of my time away from New York is a big city and although not as cosmopolitan it retains a great deal of the big city vibe. I am happy my son is growing up in a big city despite the sacrifices one must make to bring a kid up in a city like New York. I do, though, wonder what it would be like to live in a small town? 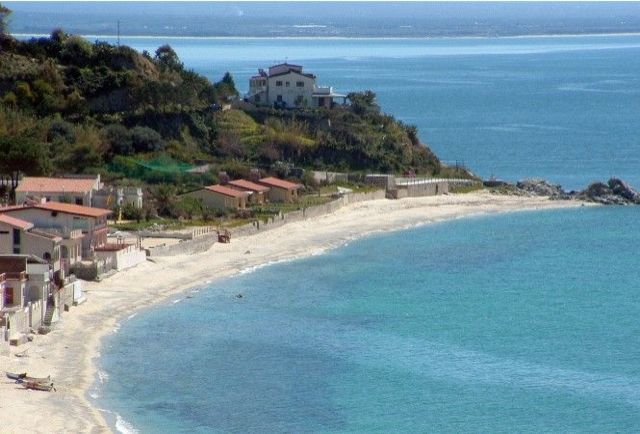 I am writing these words from exactly that kind of a small town. This is not a sleepy American burg on the outskirts of a larger urban center. This town is down in the heart of Italy’s deep South. At night I can see the giant lighthouses that guard the Straight of Messina which separate Sicily from the mainland and one of it’s southern most cities – Reggio Calabria. Directly in front of us are the beautiful Eolie islands and a twenty minute car ride away is the ancient sea cliff town of Tropea. This is as far away from it all as you can get in the so-called civilized world. The sun is fierce and the sea is crystal clear. Figs and prickly pears abound and weigh down the trees and cacti that host them along the winding country roads. Stores still close here for two hours at lunch. Sunday everything is closed. There is no rush here. A tough thing to get used to coming from the big city. And yet they live longer and healthier in these parts.
This is where my wife’s grandparents grew up before they moved to Rome. She still has tons of relatives and the older generations all seem to be in their late 90’s and have no intention of going anywhere any time soon. The old ladies still chat to each other from one balcony to the next. It sounds like a movie, but I assure you this is a first hand account.
The parents around here are worried because the kids do not want to stick around. There are certainly many problems around not least of which is the tight control that certain families have over business dealings and life in general. To the outsider it is always hard to understand why anyone would allow themselves to be bullied this way, but all too often the lack of attention from the bureaucrats leads to people organizing themselves in other ways just so that things can get done. But I digress.
The big city allows you to choose from so much for your kid each and every day and yet the frenetic lifestyle you lead also forces many genuine and authentic things to drop by the wayside to make way for convenience. Food is the best example, at least from where I sit now writing these paragraphs.
Food here is not something you have to think about. No one around here says,”What can I make for dinner that doesn’t take too long? What can I just pop in the microwave?” Certainly, they do not lead the chaotic lifestyle that is typical in the big cities, but this part of the day comes naturally to them. It is an important part that must be done and yet it is not viewed as a burden as most of us do in the urban setting. Everything is grown locally, seasonally and consumed fresh. No CSAs needed because to them it is normal that you eat this way. Needless to say, my son who has become a picky eater as of late has been eating pretty much everything they have around here. He is also enjoying the fact that his parents have been infected by the laid back attitude of the locals and are no longer tapping their foot impatiently at the local store while the person in front chats with the store owner about their kids for a half hour or search for a better wireless connection by holding the cell phone over their heads while leaning way out over the balcony like lunatics. Maybe all we really need is a few weeks of this (i.e. real food, sea breeze, sun etc.) to recharge ourselves?
I am pretty sure I would go crazy if I lived here full time and it is always difficult to judge a place when you are vacationing there for a short period of time, but there must be a reason folks around here live well (and well) into their 90s.