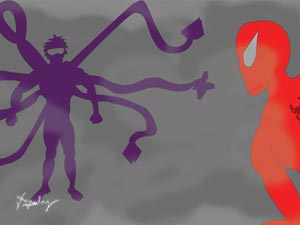 My Spidey Sense had been tingling all night. Suddenly I leapt backward completing a humanly impossible acrobatic feat while landing hard against the wall. The floor where I last stood had been crushed to rubble. Slightly stunned from the impact, my eyes burned from the dust filled smoke as I attempted to get a glance at my attacker. “Focus Spidey.” I could barely make out his silhouette. “No, it can’t be. He was supposed to be dead.” A metallic snake like arm cut through the smoke heading for my throat. Caught off guard I twisted left as I jumped, the razor sharp metal claws slicing along my right shoulder. “Doc Oc! Dammit…too hurt to fight. Feel like I’m going to black out. Got one chance.” “Vincent!” “Wha?” Vincent, come to eat now!” And so I did. I was seven. Besides, my mother was far more formidable than Doc Oc could ever hope to be.

I attributed these creative flights of fancy to comic books. From the moment I picked one up as a kid I was hooked. The artfully drawn characters. The rich vivid colors of the worlds revealed. And of course the story lines that were provided in an easily accessible format. A remarkably effective way to promote learning and literacy to a child as well as spark a kid’s imagination.

Currently making its way through film festivals and comic book conventions, “Comic Book Literacy”, a documentary film by Todd Kent about comics in the classroom and beyond takes a closer examination of the impact the genre has made from the past to the present. Below is the Official Movie Trailer:

To learn more about the film, take a look at the official website:
Comic Book Literacy