It was just the other day that my son, who just turned three, and I were at a local library. “Look Daddy. Look what I found. It’s a duck. I’ll call it Duck Duck.” at which point he held up a medium sized stuffed Big Bird toy.

Such is the life of a toddler raised without television. 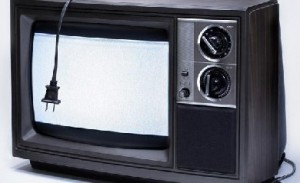 Anyone who reads my personal blog Luke, I am Your Father should know that we gave up tv before our son was born. I’m not going to climb into a pulpit and preach to you about the evils of television for young children. I’m sure there are enough detractors out there doing that already. The fact is, my wife and I read or listened to enough of these stories while we were pregnant that we decided to simply scale back our consumption and cancel our cable a couple of months before his birth. The idea at the time was that we would cut back to what we could pick up locally with our rabbit ears.  We were going to be busy anyway, plus we would save $75 a month.

We ended up so disappointed with the local reception we received that we decided it wasn’t worth watching at all. Plus being first time parents, we just didn’t have much time to watch anything anyway. This was initially a pretty big adjustment for us. Especially me. I was a child of the 70’s and raised on a lot of television. Mostly sports. I didn’t want to give this up, but decided I owed it to my newborn son to at least give it a go. I didn’t hurt that I live in what may just be professional sports version of The Bermuda Triangle – where franchise’s go to suffer and die. My mantra at the time was “Yeah, we will probably be turning it back on in a few months”.

Needless to say, that didn’t happen. What we found was that we really enjoyed spending that extra time interacting with our son. We play with him quite a bit and read him a ton of books which seems to have had a positive impact on his verbal and cognitive development. However, as I’m writing this post and reflecting on our now 3 plus year’s without television I am realizing that the greatest impact this decision has had for us as a family is probably that we are not nearly as distracted as we otherwise would be if there were a constant source of media streaming in the background. We are most often there, in the moment, together as a family. And it has been a wonderful experience.

Don’t get me wrong. It has been HARD at times. Times when both my wife and I were completely spent and would have personally benefited from having him distracted and still. This is not to say we haven’t done that either. Since our son turned two we have gradually introduced him to a few short video’s on DVD. But so far we have limited this to no more than a half an hour, one or two days a week.

I’m certainly not here to say that unplugging the television is the right type of decision for every family. I just know it has turned out to be the right one for us and thought some of you may be interested in hearing first hand about the experiences of a family who has actually done it.

As always, I welcome feedback. Let me know if you have, or have considered eliminating television from your house. You can also tell me I’m nuts and depriving my son from the benefits of Sesame Street and Thomas the Train.