Before heading out to the boat that would take us off shore we had to go over some safety issues first. How to get in and out of a basket for helicopter rescue and how to swing on a rope. Now I understood the basket rescue part, but didn’t know why maneuvering a rope swing was necessary for life out on the platform. Would we be swinging around like Tarzan from deck to deck? We made the thirty minute ride from the shore to the oil rig and while my dad slept on the deck I tried to ward of sea sickness in the back of the boat. We arrived and I quickly learned why we needed to know how to swing on the rope. To get from the boat to the platform in high seas we needed to grab up as high as possible when the boat was on top of a swell and then swing over to the deck. Grab too low and the boat crushes you against the frame of the platform. I grabbed up high on the rope, at the top of the swell and then started my swing over. For some reason I instinctively wrapped my legs around the rope, like it was tree swing at Culaby Lake. When it came time to let go on the other side my hands released and I slid down the rope taking a large knot square in the sack. I fell over with tears in my eyes from the stinging pain of my balls in throat. At the safety meeting the job foreman asked who the kid was that rang his chimes getting off the boat and I raised my hand as he thanked me for making he week. 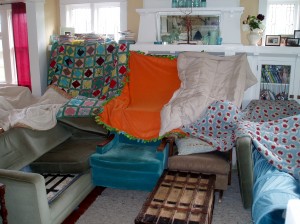 After that rough start I settled in to working with my iron worker dad. This was not the first structure we had worked on together but it was by far the biggest and most complicated. Building with my dad has always been something I have enjoyed and am eager to enjoy with my boys. Yesterday the boys and I worked on our biggest project to date, a living room fort. Having grown up with a father that built high rises and suspension bridges I knew a thing or two about the proper way to build a fort and used a lot of those tricks yesterday.

First we gathered lots of blankets, sending the boys to raid the guest rooms and linen closets for supplies. Then we moved the chairs around the living room to create a nice solid skeleton for the structure. I was shouting out order and calling the kids terrible names so they would get the feel of a real job site. I feel it’s part of my job to give them the full experience.

We ended up with a long fort along the banister that had two entrances. There was a tunnel on one end that only the little guys could get in and a bigger entrance in the back that daddy could squeeze into. It was surprisingly spacious inside and with the smaller pillows and blankets from the kid’s beds, a comfortable space. We spent most of the afternoon in the fort and Primo decided he would nap there instead of his bed. We kept the fort up all day until this morning and brought the laptop in to watch the basketball game. After bath time mommy read the boys book in the fort and we had to draw the line at sleeping there for the night. I could tell that they loved this time as much as I had when building forts with my dad and none of us got tagged in the junk for our troubles.