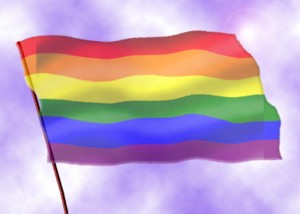 My father told me he was gay when I was fourteen years old and it changed my life forever. At the time I lived in San Diego with my mom, and my dad lived in San Francisco. I hadn’t known that I had known any gay people until that point in my life. No one had bothered to expose me to any positive information about gay people. No one shared gay history with me. I had not read any books about gay people nor had I had any books read to me.

When I was growing up homosexuality was something you just didn’t talk about.  Except when my friends and I didn’t like something. “That’s so gay!” was a common phrase in my vocabulary as an adolescent. Discovering my dad was gay at the most homophobic age a boy could be was not easy. I was forced to decide – was being gay bad or good? Not an easy question to answer for a fourteen-year-old boy with no accessible resources for answers. And the fact that I framed my dilemma in such black and white terms was indicative of the environment I was in at the time.

My kids never met their grandpa. He died almost ten years before they were born. I sometimes wonder what their relationships would have been like. I think about the positive influences my dad would have had on my kids, as they begin to form and shape their own belief systems about the world. Not just because he was gay, but because of the role that being gay contributed to how he saw the world around him, how he treated people, and what he stood for.

While my kids will never be influenced directly from their grandpa, they will feel his indirect influence through me. My personal journey to accept my dad’s homosexuality is a topic for another post (or twenty). Not only did I come to accept that my dad was gay, I openly celebrate it and I actively embrace it. My views of the world are largely shaped by what I learned from my dad, the experiences that he shared with me, and the experiences we shared together.

Two year olds are sponges, soaking up whatever they see and hear. When the sponge is wrung out, their language, behavior and attitudes are what emerge. My kids are learning everyday from a variety of sources, and while I cannot monitor and control all the sources of information that cross their path, I can and will play a major role in the dissemination of information that they receive.

I sit in the big comfy chair with one of my kids on either side of me. We are reading, a treasured time for all of us. I flip through the pages of Daddy, Papa and Me by Leslea Newman, and as I read the words, my kids give commentary: “Two daddies! Boy has two daddies! Daddy help paint. Papa play catch.” In the pile of books on the table waiting to be read are Mommy, Mama and Me by the same author, and several Todd Parr books about different types of families. They know all these books and they love them all.

And that, my friends, is so not gay.