The concept of pain is never easy to explain to a kid. My son understands the basic concept of the so-called “boo-boo”. We also try to teach him that by hitting or kicking or biting or throwing things he can cause others and most often his parents a great deal of boo-boo. He has also, unfortunately, made the connection between certain boo-boos and mommy and daddy pulling out some ice from the freezer so now he finds it quite amusing to cause a boo-boo so that he can run to the get ice the instant he has delivered the blow. It is also a great procrastination tool and smokescreen for him to use when delaying his bath time or covering up some form of mischief or other. He even has a very convincing fake cry and whimper down that he betrays by sneaking peaks through the cupped hands he puts in front of his face. 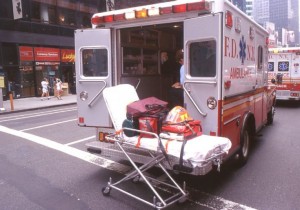 The other day, though, as we walked near home, we came upon a woman wreathing in pain on the sidewalk. We stopped and asked the two gentlemen who were attending to her if they needed help or if an ambulance had been called. The ambulance was on its way, but one of the two men turned out to be the elderly lady’s son and he seemed understandably distraught. We decided to wait with him until the ambulance arrived which thankfully we saw turn the corner a few minutes later. My son had been chatting away with everyone and asking the logical questions that a curious almost three year old would ask in such a situation. Because of the commotion, though, he was largely ignored. Once the paramedics had arrived, though, it was time for us to move on. My son, though, would not budge and was adamant about wanting to say goodbye to the woman and upset that she was not returning his waves and goodbyes. He started screaming that he wanted to say goodbye. I was at a loss. I try to explain things to my son even though some things are certainly still over his head. He had seen a relative carted off on a gurney already once and it had left him perplexed. Luckily in that instance he had seen that same relative again after a few days so he did not seem so worried that the ambulance had swallowed him. He must have felt the same seeing an ambulance “swallow” someone again and maybe he felt that this time he was going to make sure he said goodbye like he would to a stranger getting off the elevator. This time the explanation that the lady felt “boo-boo” and the ambulance was going to try to make her feel better since it was full of ice did not seem to convince him. I felt bad that I could not reassure him beyond those words. Of course, after a few minutes his tantrum subsided and he was busy with his next focal point. His reaction, though, caught me off guard since he had been innocently and naively talking to the woman (no matter that it was a one way conversation) moments earlier and he must have been jarred by the sudden appearance of the ambulance that took her away from him. Certainly a learning experience for him and one that he will witness all too often in an metropolis such as New York, but I wish I had been able to explain the situation better and reassure him that ambulances do not exist to take people away from him, but to try and help sick people get better. I am probably dwelling on this more than he did certainly, but even when you want your kids to toughen up and learn what life is really like you can never avoid the knee jerk reaction of trying to soften the blows each step of the way. It is just my wishful thinking that things such as ambulances remain, for my kid, just empty boxes with wheels that they can play with in the tub while making siren noises.