Readers, I sense an uneasiness in the air. A feeling that many of you may be concerned for the state of Dad Blogging.  After all 2010, proclaimed far and wide as The Year of the Dad Blogger, is quickly drawing to a close.  In fact, at the time this post is published, there will only be one short day remaining before all Dad Bloggers from Seattle to Shanghai unceremoniously turn back into pumpkins only to be dropped from 3rd story windows onto sidewalks below.  Right?  I mean you might have noticed that the posting has been a bit, um, scant around here recently.

Not to worry. We here at Dad Revolution like many of you I suspect, have been a bit caught up in the rush and hum of the holiday season.  We will still be here once the clock strikes midnight Saturday morning and Old Lang Syne courses steadily across the country like The Wave swallowing up fans at a local sports stadium.

And, even though I am officially off work this week, I am not imune to the time constraints that this time of year ushers in.  With that in mind, rather than a new post today I am going to repost one of my favorites from the past year over at my personal blog ‘Luke, I am Your Father’.  It is from July, titled Catch 42, and is about father and son bonding.  It will also be included in a best of the year post I plan to publish there in the next couple of days.

So, forgive my laziness.  But if you enjoy it, leave me a comment with a link to one of your favorite posts from the past year. I would love to read them.

My son turned three just the other day
He said, “Thanks for the ball, Dad, come on let’s play
Can you teach me to throw?”, I said
“I got a lot to do”, “but…that’s okay” 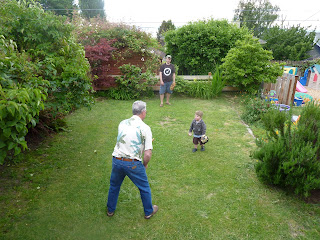 My apologies to Harry Chapin, but just the other day – Lukas’ 3rd birthday – we were recovering in our living room from the Pirate party we had had earlier that afternoon. My parents were also here and we were all pretty exhausted. In fact my dad was starting to doze off on the couch.

Lukas, on the other hand, was up from his nap and looking for fun. After playing with a few of the toys he had received earlier in the day he got up and ran off to the foyer. When he returned he was holding a baseball and two gloves, one just his size.
“Baseball!” he exclaimed, holding the mitts over his head.

“Do you want to play catch Buddy?”

“Okay, in one minute. Stay here”

And with that, I walked to the foyer myself and returned with another adult sized glove. I tossed it to my old man, who had perked up upon hearing the interchange. A smile crept over his face at this. At this point, with new life breathed into us, we all made our way to the back yard for our very first three generational game of catch with a baseball.
–
Lukas was pretty excited, and seemed to be doing pretty well with his throws, but still needed some work with keeping the mitt on and catching with it. However, what he lacked in polish, he more than made up for with enthusiasm and creativity in his goofy wind-ups while preparing to throw the ball.

In between the short throws and catches to Lukas, my dad and I were able to stretch things out to a longer distance and begin feel the zing of horsehide smacking leather. It was, after all, my dad who taught me to throw and catch a baseball. Probably at around the same age that Lukas is now. It felt really good. It always does when we can work in a game of catch.

“You do realize this is my Little League glove?” I said to my father, holding up my mitt as we exchanged tosses. “Really?” He replied. “Yeah, I won it that year for selling the most candy bars. I think you told all the vendors who stopped by the farm that they had to buy several bars or you wouldn’t do business with them anymore”. And at that we both laughed.

I’ve always had a great relationship with my father. He is an exceptional man who has always been there for me. He still is. And though we have good conversations on those occasions where we are not too busy going about our busy lives, some things most often go unsaid.

It’s funny. As a grown man I can say three words 10 times a day to my 3 year old son, but still feel awkward about saying the same three words to my own father. That’s where baseball comes in handy.

Because between a grown father and son, nothing says ‘I love you’ like a hardball tossed back and forth from 60 feet away. At least that’s what I’ve found to be the case.