I, SeattleDad, will admit it.  I once was a junkie. A news junkie that is.  I just couldn’t get enough of the stuff. 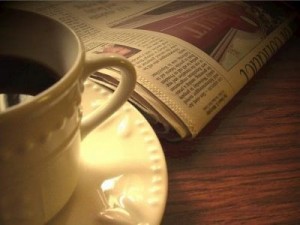 When I grew up in the 70’s and 80’s on our small dairy farm the local news was almost always on. At 6:00 AM, 5:00 PM and again at 11:00 PM I would learn which storms were on their way, who was robbed,  injured, or killed in the big city – and most importantly how our regional sports teams had fared.

Those time slots were then followed by the national news, which to this farm kid was even more foreign, fascinating, and a must see. At first I watched only because my parents did. But eventually watching became habitual for me, and by the time I was a teenager I completely craved being informed about what was happening in the world around me.

After all, everything out there seemed fast-paced, important, and exciting. Unlike what I perceived to be my daily existence.  But then as I grew up and grew older, the things I saw on the news were generally not as new and definitely not as exciting to me as they had been. Mostly, I started to find them depressing.

I stopped watching local and national news on a regular basis somewhere in my 30’s.  However, like a true junkie there were still stretches where I relapsed and would watch a lot of cable news. This was mostly when some compelling national event had taken place.

But then I became a father, and Mrs. LIAYF and I cancelled our cable subscription. After that point I began getting most of my news from the Sunday paper, on the radio, or over the Internet.  It wasn’t quite the extensive coverage that I had known through television, but it was enough to keep me functional and knowledgeable about the worlds events.

After that I started blogging seriously and the time I had once devoted to online news gradually diminished while, instead, I spent my online time reading and commenting on other parent blogs or writing posts for my own projects.

About that same time my son Lukas became mobile and active and conversational. And suddenly my Sunday mornings were spent interacting with him or preparing for whatever exciting things we had planned for the day. At that point the only news outlet I had was from the radio.

But then this past August my wife and I made the decision that Lukas would go back to his old pre-school. It is across the street from my work. The commute is generally 30 minutes between our house and my place of business. That hour was the time I had carved out to listen to the radio news. News that I enjoyed listening to.

We started out commuting with the radio on. But as the days turned into weeks, the radio proved to be a hamper to my conversing with my 3 year old about his day. I began to turn it off more and more often so that he and I could look and talk about the world outside our windows. Or of the dreams he had had the night before. Or of who he played with at pre-school that afternoon.

Then, last night Mrs. LIAYF asked me about a story she had heard on the radio. Apparenly it was a pretty big deal. I had no clue what she was talking about. And when I thought about it I realize that I hadn’t even listened to the radio news in several days.  Due to the confluence of the events described above, I found myself seriously ill informed about the world around me.

But then I realized that what I was informed about were about the events and interactions that were shaping my sons current view of the world around him.

And that this was the kind of feel good news that I would rather be addicted to.