Today is my birthday. I don’t want you to sing Happy Birthday. I want to ask you to do me a favor and learn about the Wounded Warrior Project. I know this makes it two cause related posts in a row for me here at Dad Revolution, but this Thursday is Veteran’s Day. 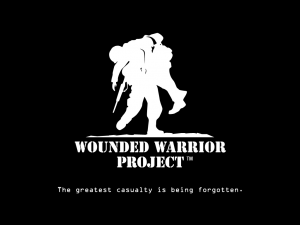 I don’t care if you are pacifist, an orthodox, a hippie, a libertarian, an aetheist, a hawk, an anarchist or a card carrying NRA member. This is not about race, religion, politics or worldviews. This is about men and women who have made an enormous physical and mental sacrifice to serve their country by land, air and sea, in foreign lands and right here at home. They do not ask why or how come or what if. Some do it for patriotism, some do it because it is a steady job and some do it just because. That too does not matter. Ultimately they go and do the heavy lifting or the dirty work, if you prefer. It is one of those jobs that we glorify, but then no one raises their hand to actually do it. We do not have a draft in this country and it may be one of the reasons that in the past couple of decades we tend to lose interest in the wars that we fight almost instantly while we recline comfortably in our lazy boys watching the game. Raise your hand if you even read about what is happening abroad these days? No you don’t. You care about the economy and not losing your job. And I get that because I do to. Fact is that we are still engaged on two active war fronts (despite what press releases from DC say), whether you agree with it or not. As a nation, though, we are complacent. It always seems to be someone else’s problem and shockingly never our greatest concern (did you hear any of the politicians leading up to the mid-terms even mention the wars or our returning soldiers and veterans?). It is disgraceful how nonchalant we are about something so serious.

It does not matter if you are for war, against war or completely apathetic towards it. Our elected officials made a decision to send our kids over seas and put them in harms way. They all too often return injured and it is our job not to forget about them. The government does not do enough and has never done enough since the GI Bill. This is an ongoing bi-partisan failure. The military community that I have only recently (in the last 5 years) come to know has taken it upon themselves to care for their own (as always) and that is just not right.

What does this have to do with dads and fatherhood and why am I bothering you with this seemingly unrelated post? I’ll answer that with a series of questions: What would you think and do if tomorrow they reinstate the draft for men and women (as is the case in many countries) and your kid has to go off to war? What if you were told tomorrow that you had to ship off to another country to fight for at least a year and leave your kids and husband or wife behind?

There are many parents that are separated for years from their families to go do this job. Put all the patriotism and flag waving aside and understand that where they are going there are no anthems, no parades, no pomp and none of the theatrics that we all too often commercialize at home just to sell some concessions and cheap flags on a stick. Even the most fervent “patriot” cannot understand, if they are not a soldier or a military family, what that sacrifice entails. I certainly cannot imagine.

I am not a soldier. The closest I came to serving my country was volunteering as an EMT with an ambulance in college and it’s not even close to what a soldier does (granted that police officers and fireman risk their lives everyday, but they do so always within their own community). What I cannot stand is to see these men and women come home and find themselves abandoned by our government and the rest of the nation that has moved on to the next political squabble or jailed celebrity or tabloid headline as soon as they realize that war is an ugly and often protracted affair that is actually not entertainment, but real people fighting a very real war. This nation and its media unfortunately suffer from severe ADD and when it stops being all fun and games, they move on.

The concept of the Wounded Warrior Project is simple, yet effective. Provide the injured service men and women with some basic tangible necessities as soon as they arrive at hospitals to start their recovery process. Their motto is appropriate and to the point: “The greatest casualty is being forgotten.”

I leave you with this testimonial from a USAF Nurse who writes: “We are forever grateful for all the WWP packs you’ve donated for our wounded warriors that come through here to recover! I wish I could capture the expressions on their faces when we give them a Wounded Warrior Project pack with the basic necessities inside…it truly is priceless! Some of them come with only the clothes on their back and may be here for weeks. So, to have some personal items to make them feel like a “normal” person, makes a world of difference. Again, a thousand thank yous could never cover the gratitude and appreciation from us and the wounded warriors.” 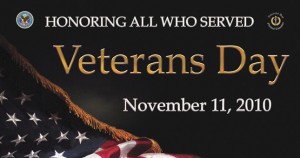 Do not forget our soldiers and take a moment to think about them if not each and every day at least this Thursday when hopefully their stories will make it once again to the front page where they belong. It is not about pride, patriotism or honor – it is about gratitude. The Wounded Warrior Project is just one of the many equally worthy causes related to our soldiers. If you contribute great, if you have gained even a bit more insight great and if you are a soldier take this as my virtual hug and handshake for what you do. It’s a thankless job and know that I do not take you for granted.

P.S. I donated a Wounded Warrior Project backpack directly through the Under Armor website, but you can also donate directly to the project on the WWP website. There are other great organizations that look out for veteran’s and I encourage you to look into them as well.