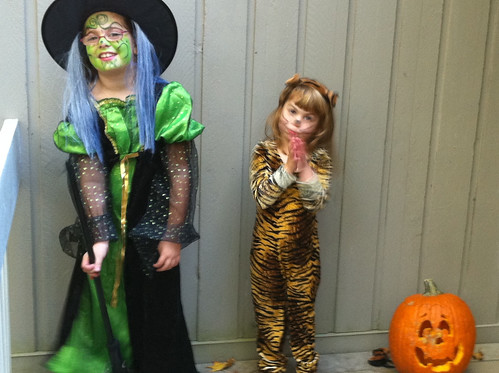 Parenthood is a fairly new show on NBC, that my wife and I have taken to this season. We like the show for a number of reasons including the fact that they do an excellent job of portraying a family dealing with special needs. On the show one of the families has a child with Autism. They show some of the dynamics between the parents and how they deal with issues raising their child.

This past episode they dealt with Halloween. The mom was concerned that her son wouldn’t do well because he is afraid of fire. It was kind of funny to watch as she attempted to shield her child from it first by trying to forbid him from going and then by neurotically trying to get every neighbor to use glow sticks instead of fire. Of course this was futile even-though she made a valiant effort.

The parents did a great job. They talked to their therapist, they brought the child through examples of how it would work, they even showed how their son decided he didn’t need to practice because other kids were not practicing. They really did a good job of showing the difficulties a family dealing with one type of autism might go through. At the end of the show there was a seen where there was a haunted house and the son wanted to go in. The parents were very worried but their son was insistent and was about to have a meltdown if they didn’t let him go. The father said let him try it, and they did. The parents were terrified but their son excited about, the candy, and the event successfully negotiated the haunted house and was happy. The parents were ecstatic.

I’ll be honest in my family we don’t deal with autism and while we do trick-or-treat with a family who’s son does have autism he doesn’t have these particular issues and Halloween is really a good night for them.

We do deal with Cerebral Palsy in our family. My oldest daughter has CP. When I started blogging most of my posts were related to dealing with issues concerning my daughter. I don’t think I’ve written a post about Halloween in the past but honestly, as parents who have a child with CP Halloween is one of the hardest holidays for us. The idea of walking from house to house is tough and when it’s dark out it’s even more difficult. On top of that there are stairs without rails, cracks in the sidewalk, and branches jumping out of the ground. It’s always been quite a workout for us as we would have to help keep Haley balanced and help her negotiate from house to house.   Well this year was quite an event. Haley told us she not only didn’t want help she wasn’t going to use her cane either. We were both very hesitant as we knew she would fall and didn’t want her to get hurt. She was determined though and refused to relent to holding my hand. She said “Daddy you said, you would never stop me from trying my best to do something like this.” She was right, I had told her she can do anything she wants, so I relented and asked my wife to as well. We were both very nervous as she went from house to house successfully negotiating the terrain in the dark. She did fall but never hard and boy were we proud and so was she.

Kevin Metzger is the 2009 East Cobber Father of the year. He writes at MySpellingsucks.com, TheDADvocateProject.com and DadoMatic.com as well as here are DadRevolution. Kevin’s The DADvocate Project is the largest independently conducted survey of dad’s ever conducted. It concentrates on looking at how dads interact within their families and communities and is trying to highlight how Dads are not the morons portrayed on TV. To participate in the survey please click here.