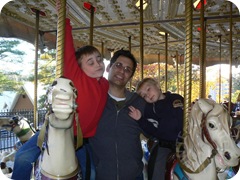 If one were to go by the standard stereotypes of society, men are supposed to be emotionally closed off.  We don’t shed tears (unless our football team wins the Super Bowl), we don’t form attachments and we show as little parental caring as possible.  The stereotypes say that emotions are for women and we macho men don’t need ‘em.  Of course, if you’ve been paying the slightest bit of attention to Dad Revolution and other Dad Blogs, you should know that these old stereotypes aren’t crumbling… they’re being demolished by giant wrecking balls!

I’ll admit that I started emotionally closed off.  Growing up, I was bullied constantly.  I learned that showing any emotion just meant I was giving the bullies ammo to fire back at me.  So my (understandable) response was to close myself up.  I built an emotional wall between myself and the world.  No matter what went out “out there”, I didn’t let it bother me.  Or at least that was the theory.  In hindsight, it’s clear that this wasn’t healthy.  Despite how much I told myself that an emotional wall kept bad feelings out, all I was really doing was bottling them up inside.

When I went to college, my emotional wall began crumbling.  Living on campus 24/7 meant that I was going to be in close contact with my peers for more hours.  This, in turn, meant cracks in my emotional wall.  Before I knew it, I actually found myself crying in front of friends.  Shocking, I know.  As painful a process learning to open up was, however, it was essential to my personal growth.  Had my emotional wall not come crashing down, I wouldn’t have been ready to be in a relationship when I met B and I certainly wouldn’t have been ready for marriage.

The stereotype smashing goes beyond a mere emotional wall, though.  According to stereotypes, women get all emotional when they see babies but men, being macho emotionless creatures, experience no such feelings.  Stereotype meet wrecking ball.  Bye, bye stereotype.

When B and I were deciding on whether or not to have children, it was clear that we both wanted kids.  What was surprising was that *my* biological clock seemed to be ringing loudest.  I would spot every baby in the store and every child walking down the street.  My dad instincts were going on overdrive and we weren’t even expecting yet.  Needless to say, I was thrilled when NHL was born.  I relished every second spent with him and couldn’t wait to introduce him to everything in the great, big world.  As he got older, I found more and more that we could do together.  Then JSL arrived and now I had two little guys to be a dad to.  And yet, more stereotypes keep crashing down. 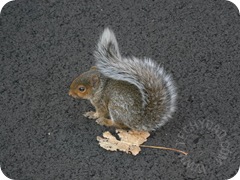 A couple of days ago, while stopped in a parking lot to take some photos, I saw a baby squirrel.  I love taking wildlife photos and so tried to get as close as possible to get a shot before it ran off.  It didn’t run away, though.  It ran towards me.  No matter where I ran, it kept following me.  I eventually had to leave, but to get in my car (and ensure that the squirrel didn’t run under it as I drove off), I had to loop around another car far from mine.  I drove off seeing the little squirrel looking around for me and suddenly felt like I was abandoning my baby.

Even a day later, it is still haunting me.  I know I did the right thing as I wasn’t equipped to handle a wild animal which, for all it’s cuteness, the squirrel was.  Still, my dad instincts had kicked in and I had the urge to buy some nuts, obtain a box, and return to the parking lot to take care of the little guy.  The instinct to be a dad was so strong that I felt crestfallen at the prospect that I couldn’t help the little critter.

Men today aren’t the cold, emotionless robots that past stereotypes say we should be.  Those stereotypes lie in ruins and I, for one, am glad.  Allowing ourselves to have and admit to complex emotions is healthy and allows dads to more fully connect with their families.