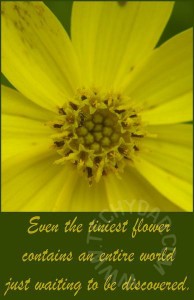 In March of 2005, I got a macro lens for my digital camera and was introduced to the wonderful world of macro photography. Since then, I’ve used flowers, toys, insects (both alive and dead – hey, at least the dead ones don’t move!) and many other items as macro photography subjects. I even made a poster using a macro photograph I had taken of a flower. When I took the photo, I liked it, but upon examining it on my monitor, I spied a pollen covered ant crawling through the surface that I hadn’t seen when I looked at the flower itself.

What does this have to do with fatherhood? Well, I’ve longed to share my love of photography with NHL. As he approached his fourth birthday, we learned of a then-new product called the Fisher Price Kid Tough Digital Camera. My parents got one for his birthday and he went to work taking photos like crazy.

On Sunday, NHL, JSL and I were outside playing when I decided to turn outside-play-time into a lesson of sorts. We looked at a tree that he has passed a hundred times. On the tree were some round buds. Pulling one off, I showed him how it was a seed and told him how an animal (but *NOT* a kid!) would break these off to eat and how the seed inside would eventually get deposited (one way or another) on the ground. I told him that this seed would grow into another tree. He decided to take one of the buds I had plucked and plant it.

Next, I showed them a flower and took a macro photograph of it. Bringing the photo up on the camera’s LCD display, I zoomed in.  Here’s the photo (unzoomed). Do you see anything besides the yellow flower? 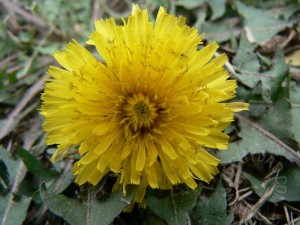 Zooming in, we can not only see the flower’s structure better, but we can see an ant crawling across it. 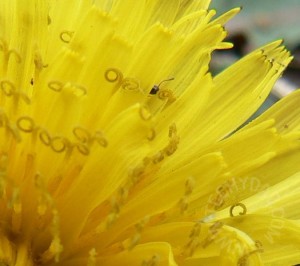 Next up was a favorite of NHL and JSL’s. A dandelion. NHL was amazed by how he could see the details on the seed, something he would normally overlook as he blew the “puffs” away. 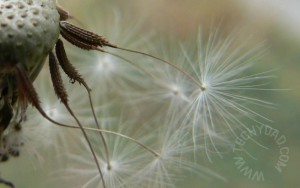 Finally, we got down to the pavement to watch the movement of the ants. I showed him how these tiny creatures were working together to move sand away from the opening of their hole. He suggested we stomp on the hole, but I asked him how he would feel if a giant came along and stomped on his house.

Overall, NHL realized that there are interesting things all around us, if one takes the time to look. In our busy lives, we’ll often pass these things without giving them a thought. Pointing them out to kids can teach them to be inquisitive about the world around them.