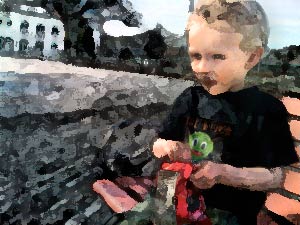 For me, the word revolution has always conjured up images of violent epic battles fought for a noble cause.  Revolutionaries would sacrifice nearly everything to ensure a better future for themselves and generations to follow. As for fatherhood, the revolution really begins from within.  The battle waged is fought in the mind between one's independent self and the father to be.  Stress laden thoughts, sleepless nights, irrational fears and more can all be attributed to the enormous change an expectant father must attempt to grasp in a small window of time.  Yet similar to every revolution, one moment in history can be traced to the life changing catalyst that sparked the call to action.  For most Dads I would guess the revolution began not with a bang but rather the soft spoken words, "Honey, I'm pregnant." [ Insert expectant Dad's primal scream here]

The days and months that followed rushed by like a cascading effect that knocked down previously held priorities and erected new ones.  The deconstruction of the existence you once held dear runs parallel to the construction of the new man you are to become.  My fiercely independent self would need to adapt or get crushed by the reality about to unfold.  I remember often hearing from my friends and family members with children how I should "enjoy myself" now because once the kid arrives, everything changes.  That the freedoms my wife and I enjoyed and took for granted would no longer avail themselves to us as parents.  And it wasn't that they were necessarily trying to be vindictive, it was more along the lines of getting me prepared for my new life as a Dad, a family man.

Suffice to say, I was in crisis mode throughout most of my wife's pregnancy.  As our due date approached, my anxiety heightened.  When we attended Lamaze class my heartbeat would often drown out the sounds in the room.  I was lost in thought all except for one, our child will be what saves me.  Like a zen meditation mantra, it was the thought of our child "saving" me that gave me a sense of calm.  It was the one clear connection that enabled me to brush aside the mountain of thoughts that weighed heavily on my mind.

My son arrived two weeks early.  I remember in the months prior expressing to my wife how I was adamantly opposed to being in the room for the birth of our son.  "Just too much for me to handle!" I'd lament.  But on the day of my son's birth, it was all a blur.  I was in the room comforting my wife as she endured excruciating pain like a champion, then I remember a nurse rushing in demanding I "hold her leg!"  Several exhausting pushes later by my beloved and I was officially a Daddy.  I felt dumbstruck but not anxious.  The weight had been lifted and replaced by awe.  Shortly after a nurse had cleaned up our son and approached me.  She asked if I'd like to hold my son.  I almost unconsciously replied to her, "no, that's okay" because quite frankly, I had never held a newborn baby let alone my own.  She smiled at me knowingly, handed me my son and I in turn just stared for what seemed like hours at this little life before me.  The revolution was in full swing.

Three years later I'm now the father of two beautiful children.  The joy and challenges of fatherhood continue to evolve as our children grow.  So too does the context of the Dad revolution.  External factors such as the economy have introduced many men to the world of being a full time parent commonly called a Stay at Home Dad (SAHD).  Overall, the parenting landscape has begun to shift dramatically towards an equal partnership between men and women.  A partnership in which men and women are not interchangeable in their roles as Fathers and Mothers, but rather complement each other in a concerted effort to provide the best upbringing for their children.  I look forward to the days that lie ahead.  My own revolution continues and there will be stories to tell, laughter to enjoy, and lessons to be learned.  Long live CuteMonster and long live the Dad Revolution.