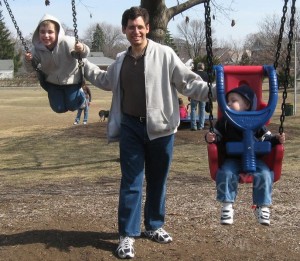 Hey everyone, my name is TechyDad. Who is TechyDad, you might ask? Well, me of course. Do you think I'd be writing about him in the first person if I wasn't he? I'm just your average web developer, science fiction and math nerd, cooking enthusiast, amateur photographer, finder of freeware, ardent advocate of alliteration ala Alton (Brown, that is)…. and also a member of the Dad Revolution.

Growing up, I remember seeing my father come home and expect dinner to be on the table (or at least ready to be set out). After eating, he would either go work on things he brought home from the office or would sit in his easy chair and watch TV until he went to bed. He would constantly claim that my mother didn't work, but I'd see how much she would toil cleaning the house, doing the laundry, running errands, cooking, etc. I knew that, when I was married, I didn't want to be a “detached dad”, I wanted to be an “active dad.”

When I first became a father, I'll admit, I was more than a bit terrified. Here was this tiny thing that depended on me. One little slip-up and tragedy could strike. It didn't help when, one month shy of turning a year old, NHL had a febrile seizure and stopped breathing. I learned dread and panic like I had never known before as I thought I was watching my baby die in front of me. Luckily, he began breathing again and was ok. We had had febrile seizures and so knew the possibility existed, but weren't prepared for the reality. (We found out that they're usually harmless, but try keeping that in mind when your baby's not breathing!)

Still, I persevered. I changed diapers. I cooked dinners. I got up at hours that by all rights I should have been spending in dreamland because little ones were crying. I steered little ones away from bad and possibly dangerous behaviors and into good, safe behaviors. And, you know what? I was having fun!

For every scary time, there were many, many more happy times. Seeing my sons walk for the first time and talk for the first time. Seeing my big kid become an avid reader (like me) and gain an interest in science fiction (like me) and math (like me again – should I rename him mini-TechyDad?). Seeing my little kid's personality blossom as he insists on being called “Big Robot JSL Pup-Pup Tigger” while wearing new Tigger sunglasses and trying to bounce in his carseat. Trying to capture all of the moments I could using my camera and thanking the inventors of digital cameras for keeping me from having to develop ten rolls of film just to have three non-blurry, non-looking-away, non-throwing-a-temper-tantrum-because-daddy-is-taking-too-many-photos, non-blinking pictures of my boys.

However, while I was a dad and later a dad who blogged, I never really felt like a member of a community. My wife was part of a mommy blogger community. Where was the daddy blogger community, I wondered. I began finding more and more dads blogging online. Of course, I never really thought I was alone in this dads-who-blog thing, but it was great finding and following other dads going through the same things I was. I could see a dad blogger community forming in front of my eyes. I even met one or two in person and hope to meet more when I go to BlogHer this August. And now I get to join up with some great Daddy Bloggers in glorious Revolution! We shall be overthrowing old stereotypes of not only the dad-who-does-nothing, but also the dad-who-knows-nothing and the dad-who-is-only-interested-in-sex-beer-and-sports. (Not that those last things aren't great, but we aren't defined by them.)

Now who has the pitchforks and torches…. to, uh, roast marshmallows with. Yeeeahhhh.