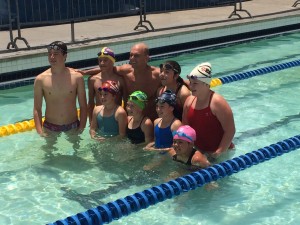 My exposure to organized sport swimming was limited to second-hand knowledge of my younger cousin, who is currently ranked very well in some regional division that I’m sure is very impressive to those in the know. He is an immensely good water polo player (if you don’t know what water polo is, it’s basically where you ride a bunch of horses through a public pool whacking the opponent’s balls with a long-handled mallet) and received several scholarship opportunities to play at the collegiate level. My younger cousin learned to swim at the age of two or three from his father, a man so passionate about swimming that he had a jet installed in his pool so that he could swim the same lap for infinity. Starting at this young age, and under the guidance of a very intelligent, driven and passionate father, my younger cousin (we’ll call him “Frandon” for the sake of anonymity) became a very accomplished swimmer, and developed debilitating, stress related OCD at the age of six.

Frandon would frantically wash his hands to the point where they would bleed, and then subsequently freak out about the general uncleanliness of having chemically crackled, bleeding hands. If he so much as got a drop of urine on him while using the restroom in the middle of the night, Frandon would panic and immediately have to take a shower. Then he would wake up the next day, and go to swim practice where he would swim in a vat of chlorine saturated kid pee. No, Frandon was never told what was really up. But it all paid off in the end, because due to the pressures he overcame as a child, Frandon became one of the best swimmers around and is now going to college for chemistry.

Swing and a miss on the whole Subway endorsement deal.

So when I was offered the chance to write an article for swimtoday.org about the fathers of Olympic gold medal winning swimmers, I agreed to bring my wits to heart of the establishment, ready to cut deep into the “hover-parenting” phenomena that has single-handedly created the profession of “Child Psychologist.”

Contrary to my beliefs, the event turns out to be a delightful gathering of families. Everyone is in perfect shape. Smiles are everywhere. There are no parents critiquing their child as they come up for air. They even have outdoor massage tables, presumably to take the edge off of swimming on a gorgeous June afternoon.

Then something happens. After some charming crowd banter from Olympic Gold Medalist Rowdy Gaines, each of the dads begins telling their story. Present are Dick Franklin, father of Missy Franklin, and Pat Dwyer, father of Connor Dwyer. Their children are some of the fastest swimmers in the world. The running theme of both upbringings? As Dick Franklin puts it:

“Don’t push them one way or the other.”

Now remember, I came here expecting the equivalent of a seven year old’s beauty pageant in respect to the quality of parenting. I arrived believing that any sort of success in this field would have been the direct result of borderline child abuse. Yet here I was, listening to these very unassuming men of calm demeanor talking about how all they cared about was that their kids were having a good time. Each parent testified that at certain points in the Olympian’s upbringing, certain activities (skiing, basketball) began to fall to the wayside so that the child could focus on swimming. It was the child’s choice. They wanted to focus on swimming. They were thinking for themselves and making judgment calls for their own future. If it happened to be that Missy Franklin wanted to pursue competitive chowder guzzling, I’m almost next to positive that her father would have said, “Absolutely, my little Bread-bowl.” Unsurprisingly, in the case of the greatest competitive swimmers in the world, it turns out that they were not made into swimmers through the intricate and complicated handling from their parents, but that they most likely were “born swimmers” and their parents simply enabled and encouraged them to be the best version of themselves, whatever that may have been.

Or I dunno, maybe having enough economic security to afford a house with a pool/membership to a swim club/live in an area with enough affluence such that it can afford to construct and maintain an Olympic sized indoor pool during one of the worst droughts in recorded history eases the burden of raising champions…

But I’m pretty sure it’s probably the first thing.

Don’t forget to use the official #funnestsport

For more information, check out your local swim club and join in on the funnestnessisisity.