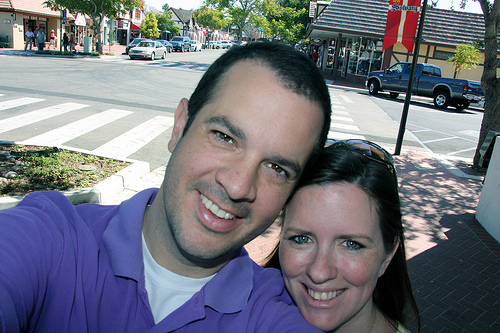 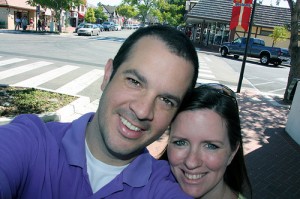 I was happy to write a guest post for Adam because it only takes but a quick look around Dada Rocks! to see that he not only relishes being a father, but also is very plugged into the world of social media.  This second quality is one that many men today don’t have. Women largely dominate social media – especially social media related to family and child rearing – and many men are confused and even angered by how much time their wives spend online. Instead of shunning social media, however, I encourage men to embrace it. It can enrich their lives more than they could ever imagine. I know it has mine.

Like most men with social media wives, I too was thrown for a loop when my wife, Heather, got involved online a few years ago. It seemed that overnight she became totally engaged in her computer – writing her blog, The Spohrs Are Multiplying, reading other blogs, sending Facebook messages, and tweeting.  When she would look up from her computer long enough to talk to me, it was often to mention people I didn’t know with strange names like “Redneck Mommy” and “The Bloggess.” For a while, I must admit, I wasn’t the most receptive to this new interest of Heather’s, but slowly but surely I made an effort to understand it – if only to get a handle on why it so enthralled her.

In 2007 Heather and I became pregnant with our first child, and we were ecstatic. Unfortunately, it ended up being a very difficult pregnancy, and our daughter, Madeline, was born 11 weeks premature with underdeveloped lungs. After a very rough start, she grew stronger in the NICU, but still had a long road in front of her. It was then that I first saw the benefit of social media as Heather found other NICU families online who offered her tremendous support and advice during this difficult time. Finally, sixty-eight days after Madeline was admitted to the NICU, she was able to go home.

After Heather’s maternity leave ran out, we decided that I would stay home with Madeline. Soon Heather suggested I begin a “Mr. Mom” style blog to chronicle the experience, and I did just that, launching my blog, The Newborn Identity (the archives of which can be found on my wife’s site at www.thespohrsaremultiplying.com/newborn-identity). It only took a few posts for me to get an even better understanding of why the online community was a great thing. Women (and men) from around the world reached out to laugh with me, support me, and offer helpful advice. Eventually I was almost as involved in the online community as Heather. This was a good thing – not only did our shared interest bring us closer together, but our new family found support from others like us from around the world. We had yet to see, however, just how deep a well of support the social media world would offer us.

On April 5th, 2009, Madeline came down with a cold. Heather and I took this very seriously because, as a former premie, she had a harder time shaking bugs than your average kid. We took her to her pediatrician who, after examining her, had Maddie transferred to the hospital. The doctors there assured us they would have her feeling better shortly, but everything that could go wrong did, and just two days later our baby girl passed away.

In the aftermath of this horrible loss Heather and I didn’t know how we could go on. Amazingly, it was the social media world that held us up. Thousands of posts were written in memory of Madeline, tribute videos popped up all over YouTube, and she became a trending topic worldwide on Twitter – all of which showed us Madeline was not forgotten. Heather and I weren’t forgotten either – letters of condolence, gifts, food, and money for Madeline’s funeral costs poured in. So much money was sent, in fact, that we used what was left over to start our charity, Friends of Maddie, which benefits the families of NICU babies.

Losing Madeline was the hardest thing I ever went through, and I can honestly say that without the love and support from the online community I don’t know if I would be here, or if my family would have survived intact. The love and support was that profound.

Today, I don’t maintain my own blog anymore, but I write the occasional post on Heather’s site and help her to make fun videos with our second daughter, Annabel. I am also active on Twitter and keep up with the social media world. Social media is a constant source of conversation for Heather and myself, a place where we can interact with our now mutual friends, and a continual support to us in remembering Madeline. It has been truly amazing.

So, to any men out there who may be confused by their wife’s interest in social media, embrace it. Instead of letting it drive a wedge between you, join in the fun. My doing so has made all the difference in my life.