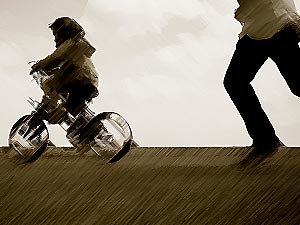 As he raced down the sidewalk furiously pedaling away on his two wheeled steed, the adjacent grass rippled in his wake. He beamed with confidence evident by a smile that seemed to light up the path outstretched before him. Intoxicated by speed, the boy seemed determined to take flight. Little did he realize he’d get his wish. As he leaned into a sharp curve, the momentum of the bike hurtled the brazen rider and his steed off the sidewalk on to a nearby overgrown lawn. Shaken but not hurt, the boy began to cry. My son, just turned the age of 4, had experienced his first wipe out on the maiden voyage of his new “big boy” bike.

I have to admit, I felt a tinge of guilt witnessing my son’s crash. Especially since I could have stopped it. In short, at the moment I thought, “he’s going too fast for that curve ahead but the grass is soft there. I might as well let him take a fall.” I determined he’d be better equipped for future rides if he experienced a harmless crash that taught him a lesson about safety, speed, physics and respect for riding his bicycle. I would categorize this as one of many judgment calls a father must make to allow a child to experience failure in order to build a child’s confidence. Thankfully, my quick assessment of the situation turned out to be the correct one. As mentioned previously, my son cried out of fear rather than pain. He stopped sobbing almost immediately when I explained to him why he crashed. I made a conscious decision not to engage him with sympathy but rather provide answers. Without hesitation he hopped back on his bike and he continued to ride. “My son’s growing up” I thought. Me too.

Below are a few observations I’ve made in respect to transitioning from a tricycle to a bicycle: