Sunday in the park is the only place one can really survive in Manhattan when the sun starts to literally melt the asphalt. We pack the stroller with plenty of water and toys and head out to the Great Lawn in the heart of Central Park. I am very grateful that plans to turn this vital patch of green into more city blocks was scuttled in the mid-1800s. As a parent, I realize how important this resource is for surviving with kids in the city. 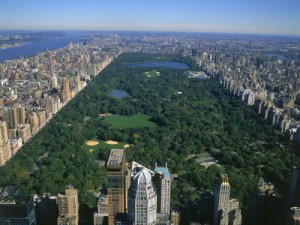 I also would like to take a smidgen of credit for Central Park as you see it today. When I was just a wee lad growing up in a New York City that had barely survived the 70s and was trying to hang on in the 80s, a few volunteers decided that it was time to reclaim Central Park from its sad state of degradation. Although it was used much the same way it is used today, as a way to escape the din and chaos of the city streets, it was more dustbowl than oasis. I was recruited to volunteer with a new city parks initiative called “You’ve Gotta Have Park!” (a nod to the song “You’ve Gotta Have Heart!”). We were stationed next to the now beautifully restored promenade that leads to the Bethesda Fountain and we asked, using the cutest kid faces we could muster, each passerby to contribute a dollar to help rebuild the park which was not receiving much, if any, city funding. To make a long story short, over the next few years, slowly but surely, and thanks to so many great volunteers and patrons, Central Park got a sorely needed makeover and now is a case study in grassroots local community efforts to pick up the slack from underfunded and disorganized municipalities.
Now my wife and I can setup shop in the shade and play until my son conks out for a couple of hours lulled and cooled by a fairly constant breeze even on the most humid days. Lying on my back I see blue skies through the trees (OK so I also see the occasional jet or helicopter, but you know what I mean) and listen to the sounds of the nearby softball games or children chasing each other on the lawn, no cars honking or buses kneeling, just New Yorkers enjoying the park. Not bad for a tiny island crammed with concrete, steel, glass and one and a half million people!
My son will grow up assuming that this incredible park that allows you to get away from the hustle and bustle has always been this inviting and stocked with swings and jungle gyms and lush green mantles to run on and kick, throw and catch balls on. I dealt with dirt fields with broken glass and early curfews (thanks also to the occasional Houdini act pulled by one of the big cats in the then decrepit zoo) so I am more than happy that he can just enjoy the transformation. I, on the other hand, cannot begin to tell you how much easier my life is by having such an incredible getaway within walking distance of our apartment. Sometimes, when I’m there, I can can even hear myself think.