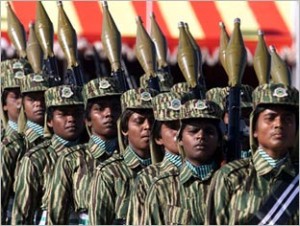 Before you actually become a parent, you do not realize the near mythical importance of the pacifier, also popularly known as the Binkie. The Binkie is not like other baby toys. You buy a mobile, your newborn stares at it for 20 minutes then pulls it down and gives it to the dog. He’ll slobber on a teething ring for a little while, then eat it or try to hide it in his butt.

The Binkie is a whole other deal. A Binkie to a baby is like an 8-ball of cocaine to Richard Pryor – that mutha starts calling to the baby if it gets placed too far out of reach. It’s like Edgar Allan Poe’s “The Tell Tale Heart” – no matter where the baby is, he can hear the Binkie screaming his name, begging to be sucked into oblivion.

The strange part is that the Binkie leaves a wake of destruction in its path that the baby apparently does not notice. Gums can start bleeding, the baby’s teeth grow in malformed. Literally, a cave begins to appear in the kid’s mouth where the Binkie normally goes, and the Binkie just sits there, staring at you, laughing at the orthodontist’s bills you’re going to soon be paying. The Binkie doesn’t care. He’s like a mafia don, all he’s missing is the pinkie ring. “Ya wanna get rid of me? Ya wanna stop sucking me? Fuhgeddaboutit,” he says, in his sloppy, drooling glory.

The Binkie’s smart, too, like a rat, or mold. The Binkie sneaks up on you slowly, without warning. First, your daughter only sucks on the Binkie after she’s done with her milk. Then it’s when she wakes up in the morning. Then before her afternoon nap. Then she needs it to go to sleep. It’s not The Binkie anymore, it’s BINKIE, a person with thoughts and dreams and aspirations to devour your daughter’s soul, hoping to worm its way into the tiniest crevasses of her existence. He manipulates, he coerces, now she needs it all the time, she never stops, she needs it all day, every day, 24/7, she needs it more than breath itself, or light, or love, or Mommy, or even a mind. Aaaauuuuuggggghhhhhh. Congratulations, Binkie has taken over.

Once Binkie’s in, he doesn’t want to leave either. He’s like the Tamil Tigers guarding their mountaintop staging area. If he were a North Vietnamese in 1972, he’d lie underneath a lake, breathing through a straw for weeks at a time. I’ve seen grown men break down in heaving sobs when they’re faced with the prospect of separating Binkie from their baby son’s mouths. Half of the maternal desertions in this country are caused by mothers’ fear of trying to get their child to sleep without Binkie.

But you have to do it. Your kid starts flirting with pre-school age and, if he still sucks on that rubber crack pipe, sorry, you ain’t getting admitted. You have nightmares about your child pulling into his high school parking lot, getting ripped out of the car by an angry mob and beaten senseless when he shows up with Binkie in his mouth.

So you and your spouse stay up late at night, scheming, thinking of ways to outsmart Binkie, that little Napoleonic jerk. You read books, you consult charts. A thousand different ideas course through your mind. But still, you know – yes, you know – there’s only one way to do it and it scares you to death: cold turkey. You’re going to have gather up all 700 Binkies in your house (uh huh, they multiply, too, when you’re not watching, like Gremlins) and throw them all in the trash. You’ve got one in every room of the house, your car, the backyard, your wallet and any place else you might find yourself when, God forbid, your kid realizes Binkie’s not in his mouth.

You’ll probably try to get rid of Binkie on a weekend when you can, if need be, escort your child to electro-shock therapy without missing any work. You’ll clear out your schedule, remove all sharp objects. A clergyman will come to bless your home. Then, you ready? Shhh, shhhh. Be quiet. Very quiet. It’s D-Day, your house is Normandie, your nursery is Omaha Beach, and you’ve just thrown all the binkies away.

Boom! Pow! Crash! It’s on!! Your kid is freaking out!!!! Shaking and sweating and panting and just…….freaking out. It’s like watching the season premiere of Celebrity Rehab with Dr. Drew – strange beings inhabit her body as she thrashes around, desperate to put something in her mouth. She’s chewing on upholstery, lightbulbs, your dog’s tail – she doesn’t care, she just needs to fill up her oral cavity with anything that doesn’t taste like strained carrots.

It goes on for two days. The Exorcist has nothing on you. The cleanup could take weeks. Milk is spilled all over the kitchen. Bedding and clothes and diapers and toys are strewn all around the house. Neither you nor your spouse has slept in two days and you’re physically and emotionally exhausted. Nevertheless, against all odds, your child has kicked his habit. Whew! The withdrawals were gnarly and you imagine Jeff Conaway went through something like this before he died but you’ve made it to the other side and your kid is sleeping soundly in her bed with nothing in her mouth but a tongue. You’ve done it. Mazel tov.

The next morning, she wakes up and discovers video games. Now, you’re really screwed.

Dan Indante is a bitter, vindictive attorney who is ten years removed from writing the seminal relationship book, The Complete A**hole’s Guide To Handling Chicks, quite possibly the most offensive piece of work in the history of American literature.  Now, with two kids and a wife, 43-year old, fat, balding, unrepentant Dan pretends to be a model parent during PTA meetings and Little League games while secretly writing MadDadzBlog.com, a website that rages against the banality of modern parenting.  Dan lives and works in Beverly Hills, California, until the creditors from his various real estate projects catch up to him.

3 thoughts on “The Dreaded Binkie”